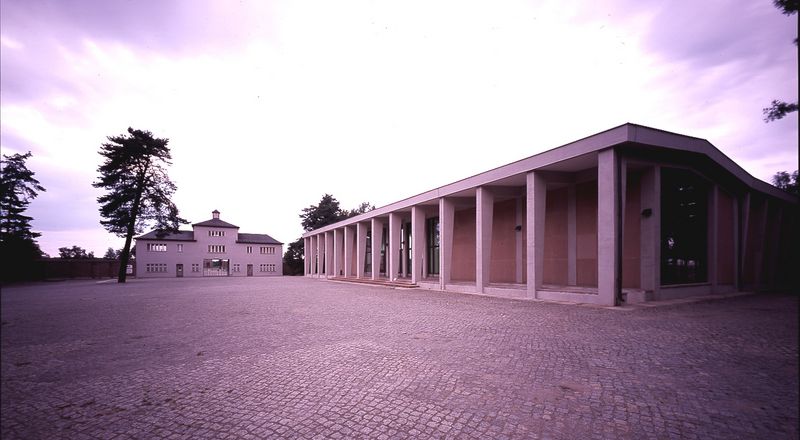 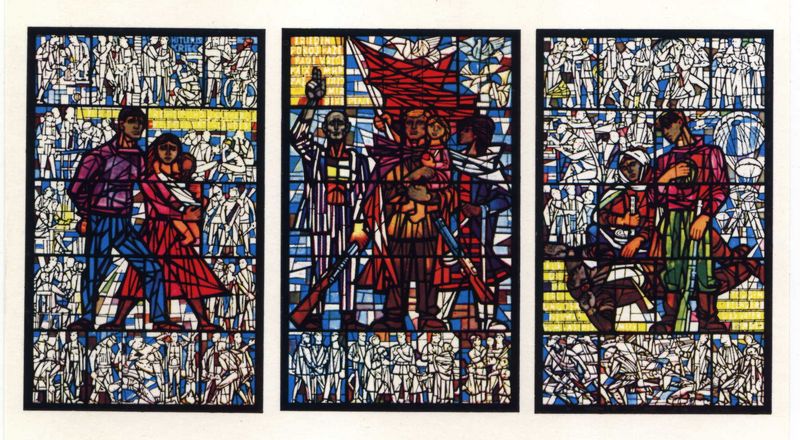 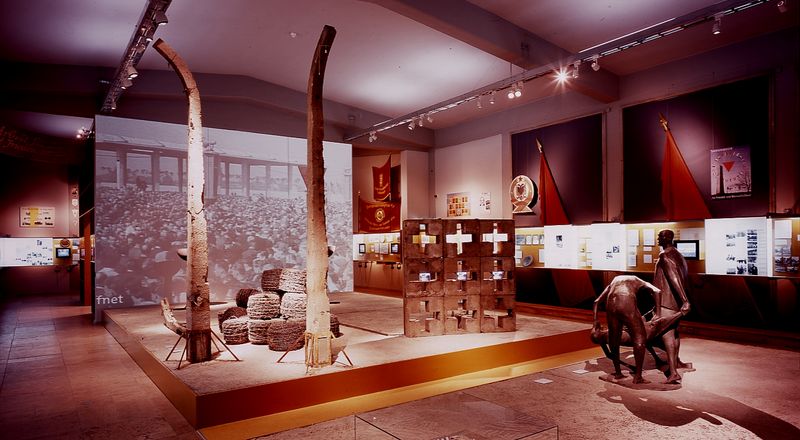 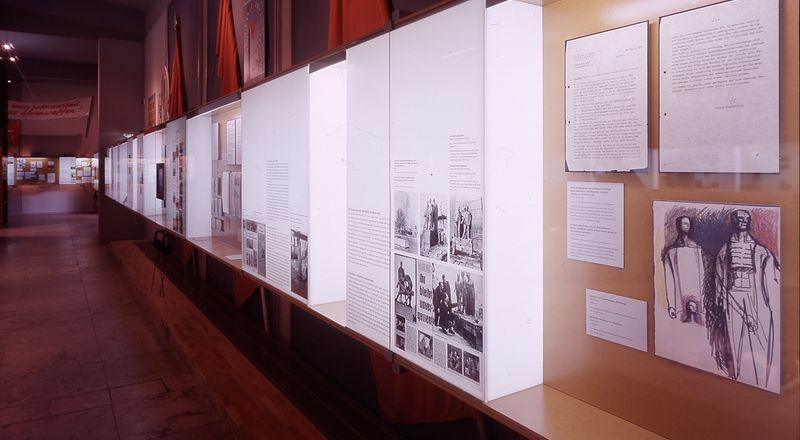 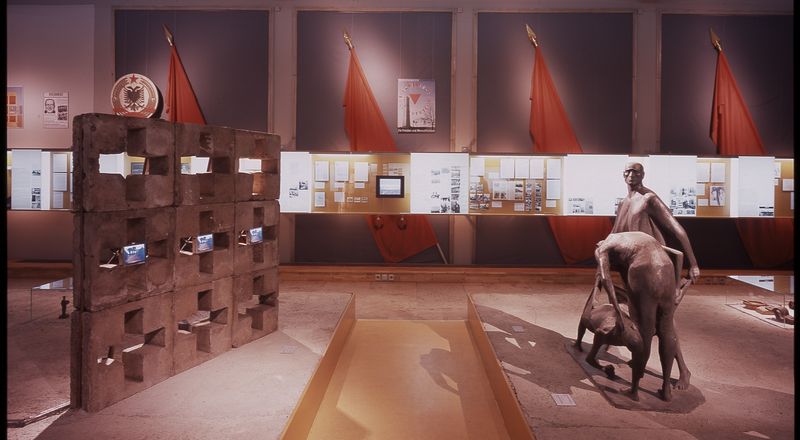 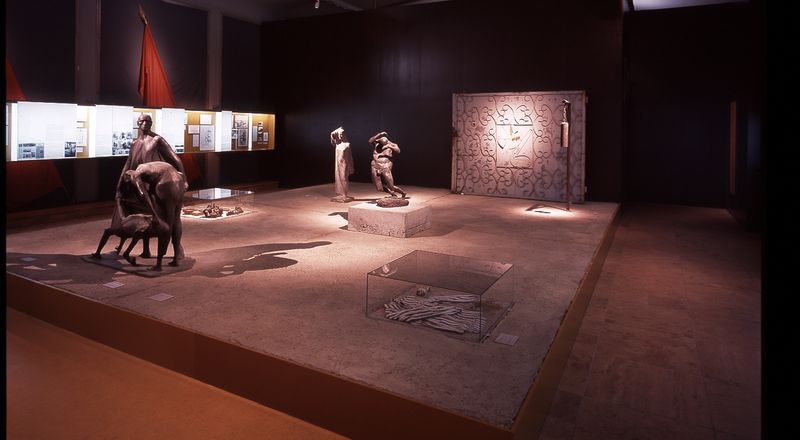 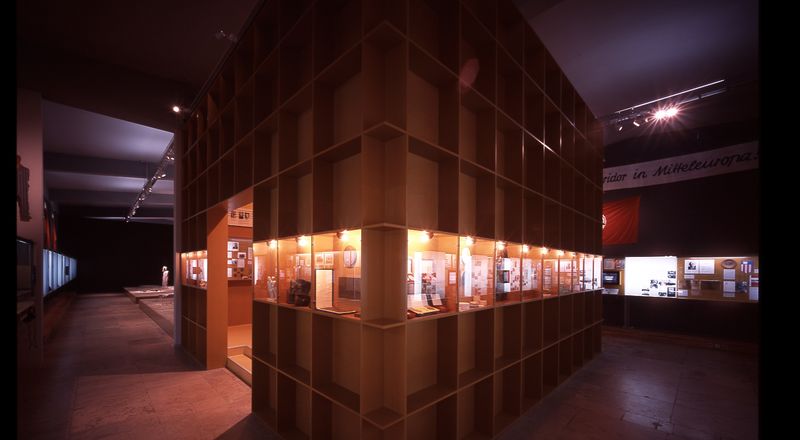 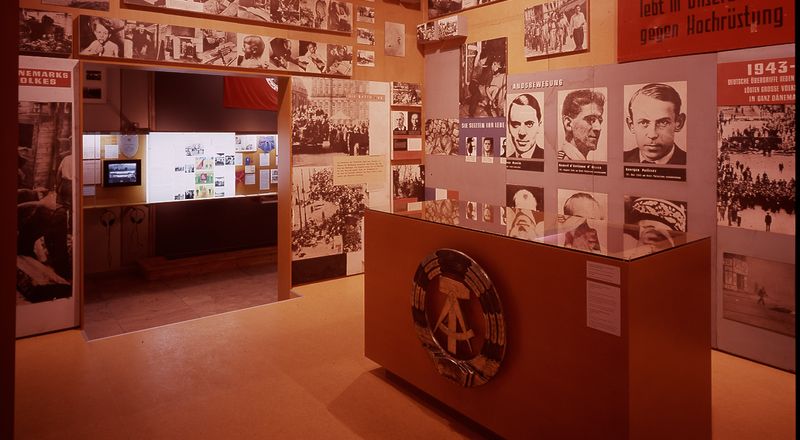 From Memory to Monument. The History of Sachsenhausen National Memorial 1950–1990

Films, audio clips, artwork, plans and numerous artefacts illustrate the story of the memorial site, from the first acts of remembrance after 1945 to inauguration as one of the GDR's National Memorials in 1961, continuing up to German reunification in 1989. The exhibition examines the sweeping changes made to the historical substance by East German architects and planners, as well as key aspects of the political instrumentalisation of antifascism.

The New Museum was constructed during the GDR era in 1959–60 on the foundations of the SS garages in the former command staff area. It was opened at the inauguration of the National Memorial in 1961 as the Museum of the Anti-Fascist Liberation Struggle of the Peoples of Europe. As part of the programme to remodel the memorial site, the New Museum was renovated under the direction of Braun and Voigt architects from Frankfurt. It was reopened to the public in 2002, with a completely redesigned museum space of 600 square metres in the left wing of the building. This comprises two new permanent exhibitions, one covering the history before and after the Sachsenhausen concentration camp.

The exhibition traces developments beginning with the first acts of remembrance held outside the former concentration camp grounds in 1945, followed by the neglect and destruction of the site after the closure of the Soviet Special Camp in 1950 and during its use by the Militarised People’s Police (KVP), as well as the hotly contested proposals for dealing with the site as a place of remembrance. In 1953 the central committee of the Socialist Unity Party (SED) resolved to establish three National Memorials.

A team of architects and landscape architects, known as the Buchenwald Collective, was commissioned for Sachsenhausen. They reduced the extent of the memorial area from the overall complex to the triangle of the main camp, they spoke in favour of a methodical artistic remodelling of the memorial grounds and the demolition of almost all of the surviving original

With the help of photographs, plans, artistic studies and drafts by the designers, drawings, models, artworks, posters, excerpts from old newsreels from former East and West Germany and countless other objects, the exhibition shows the considerable alterations and remodelling of the historical site carried out by the East German architects and designers, together with important aspects of politically instrumentalised anti-Fascism. The East German (GDR) leadership used the inauguration of Sachsenhausen National Memorial on 23rd April 1961 to make a national and international demonstration of the state doctrine of anti- Fascism.

The last section of the exhibition, “The Monument Crumbles”, shows how the state appropriation of the memorial for its own purposes was gradually subverted. It focuses on the peace movements, church groups and citizens’ initiatives, as well as “excluded” groups of former victims, that chipped away at the Communists’ “monopoly on heroism” during the 1980s and publicly laid claim to the site of the memorial. The gradual structural deterioration of the built fabric of the GDR’s National

The exhibition is structured around five themes, each of which is illustrated with key exhibits. The main exhibit, however, is the museum itself (making it the ideal location for such an exhibition) because it was part of the memorial complex designed in the GDR era and also its main museum building. Architect Stefan Haslbeck and his team have acknowledged this aspect in their exhibition design, using walls containing a series of display cases, primarily for three-dimensional objects, film presentations and audio excerpts, to create recognisable and coherent themed sections.

Standing in relation to each of these on a broad area of concrete are impressive large exhibits, including the bronze sculpture “Falling Man”, the trial model for the statue “Pieta” at “Station Z” by Waldemar Grzimek, parts of the cross wall built later around the roll-call area, a gate put in by the NVA, a film showing the inauguration ceremony of the National Memorial, and the “Ernst Schneller cabinet”. These are positioned in the central area of the exhibition space, where they can be seen to their best effect.