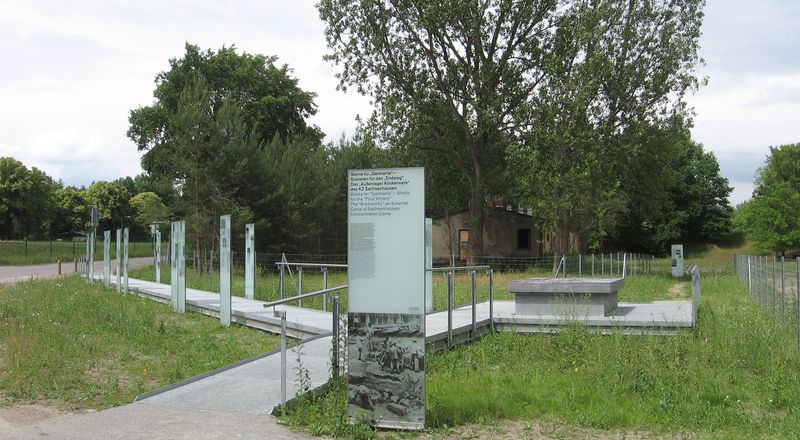 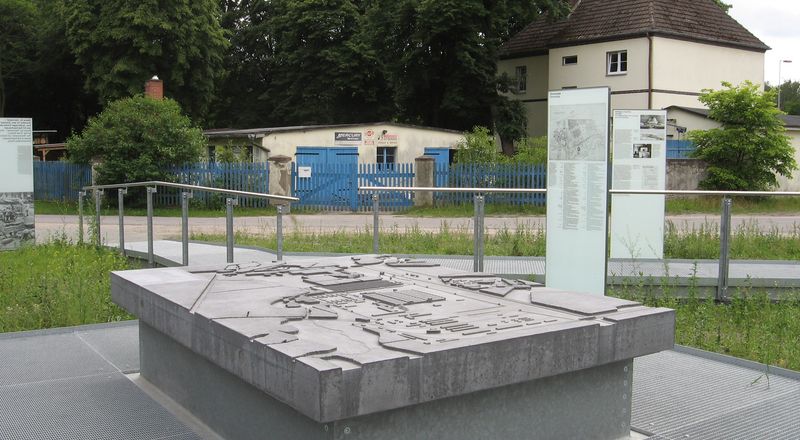 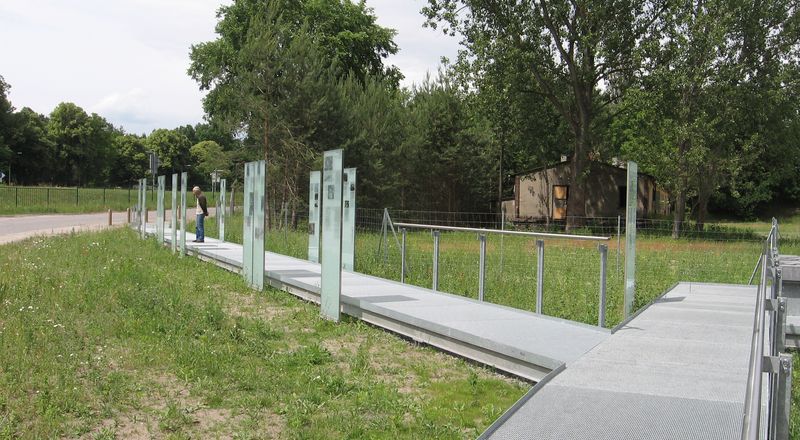 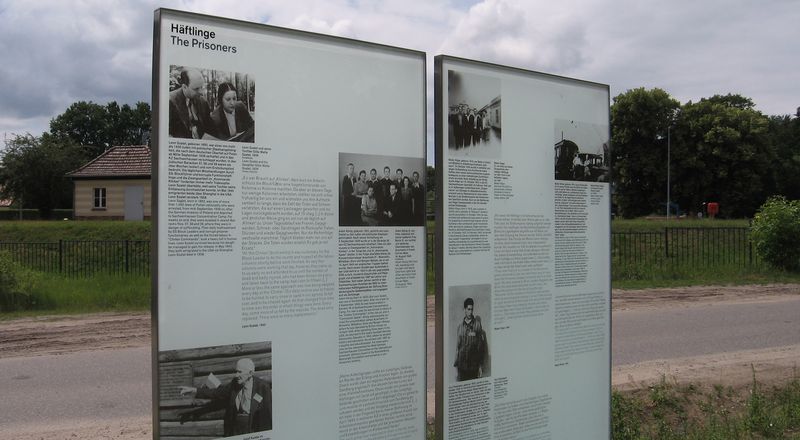 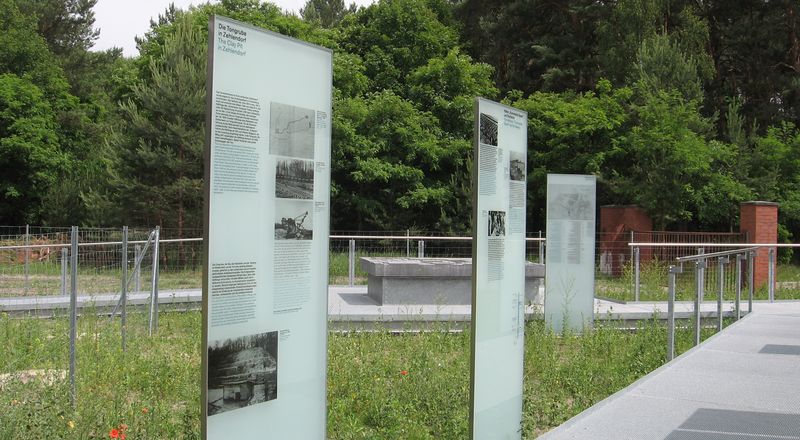 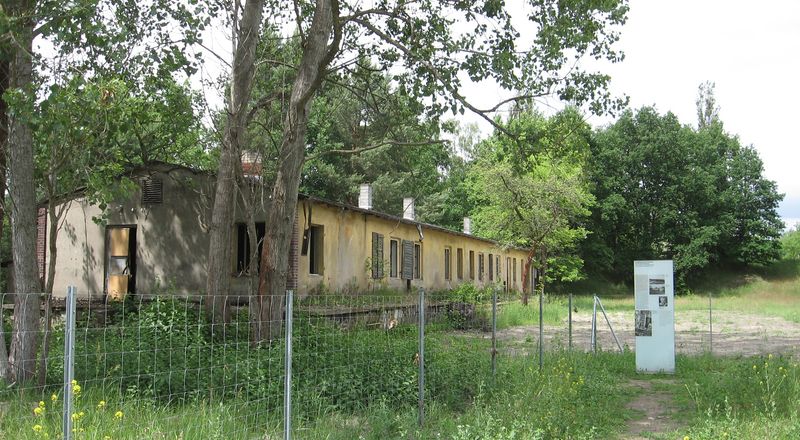 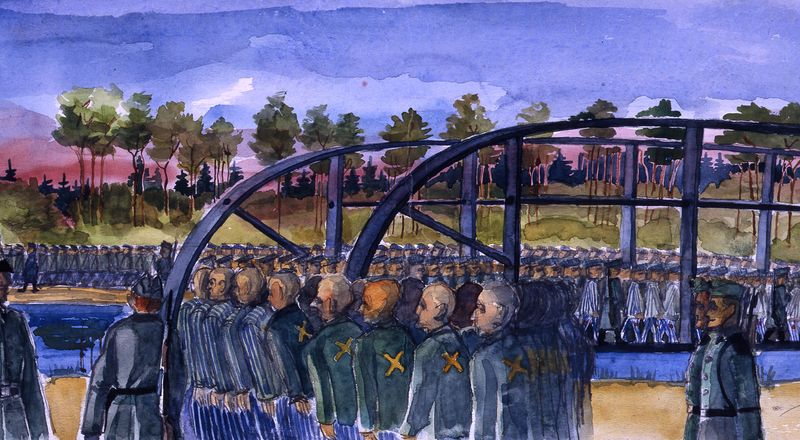 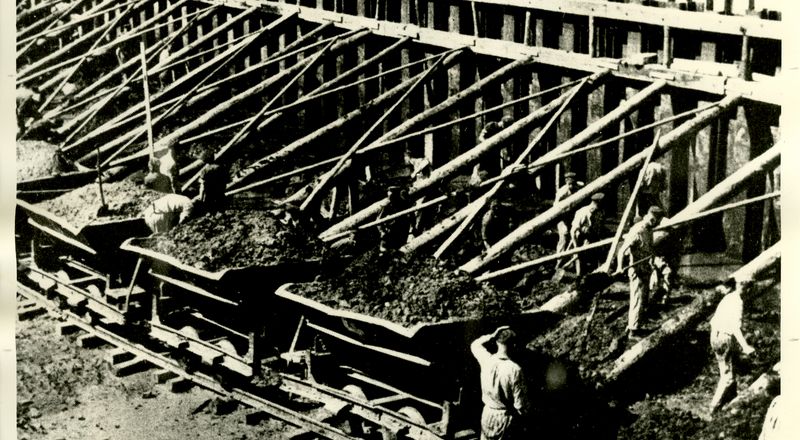 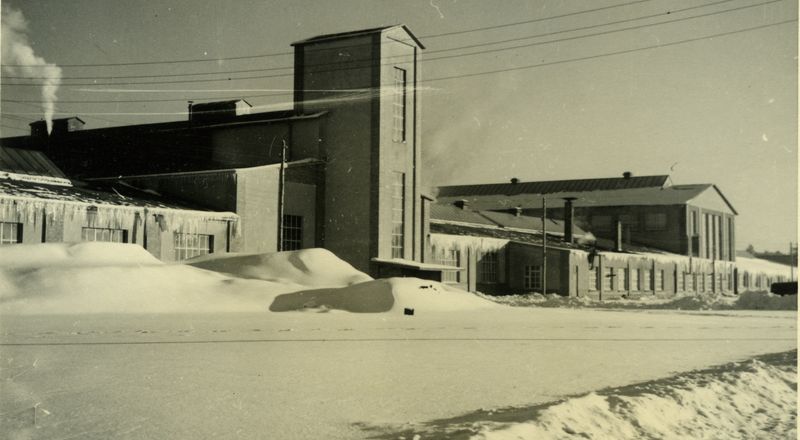 Stones for "Germania" – Shells for the "final victory". The "Klinkerwerk" Satellite Camp of Sachsenhausen Concentration Camp

Death camp
From the late summer of 1938 the inmates of Sachsenhausen concentration camp were forced to build the world’s largest brickworks not far from the Lehnitz Lock near Oranienburg. It was intended to supply building materials for the monumental construction projects planned by the Nazi leadership in the “Reich” capital city Berlin. Each day the SS marched up to 2,000 inmates over the canal bridge to the “Klinkerwerk” brickworks under the gaze of the local Oranienburg populace. On the way back, the inmates trundled a cart laden with the bodies of that day’s dead. The detail was especially feared among the inmates as a “death camp”, not least because the SS used the “Klinkerwerk” as the scene for perpetrating deliberate murder operations.

Open air exhibition
The open air exhibition comprises 16 glass panels ranged along a raised walkway. Information in text and image on these panels recounts the history of the SS-owned “Great Brickworks Oranienburg”, in which thousands of inmates of Sachsenhausen concentration camp were forced to work. Located not far from the Lehnitz Lock on the site of the former SS firing range, the exhibition is rounded off with a large-scale model showing the largely destroyed structures of the “Klinkerwerk”. In addition, four steles placed at the scenes of events provide information about the SS bread factory, the inmate camp, the dock and the stone processing works.

Travel
The open air exhibition is located on the site of the former SS firing range directly by the Lehnitz Lock. To reach it by road: take the B273 towards Bernau, and beyond the bridge across the Oder-Havel Canal turn left into the road “Lehnitzschleuse”. 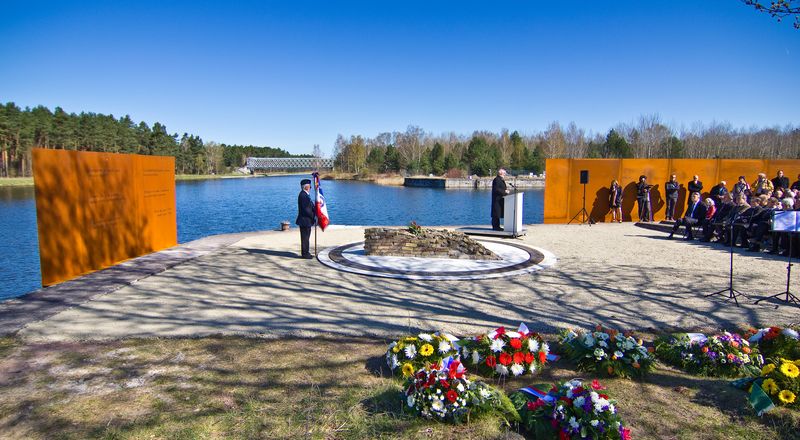 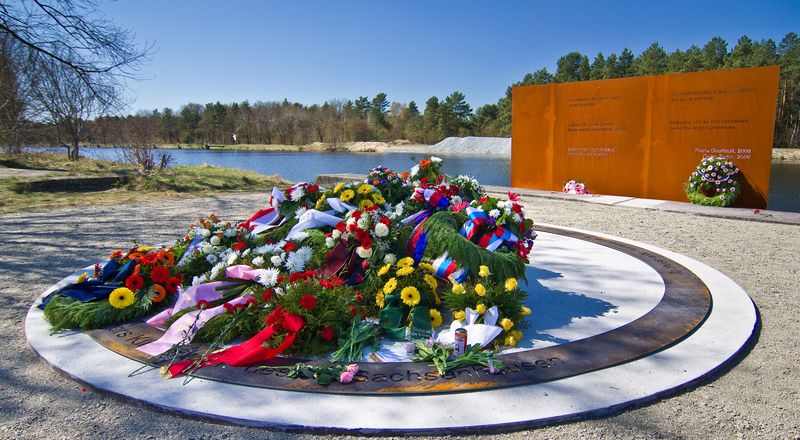 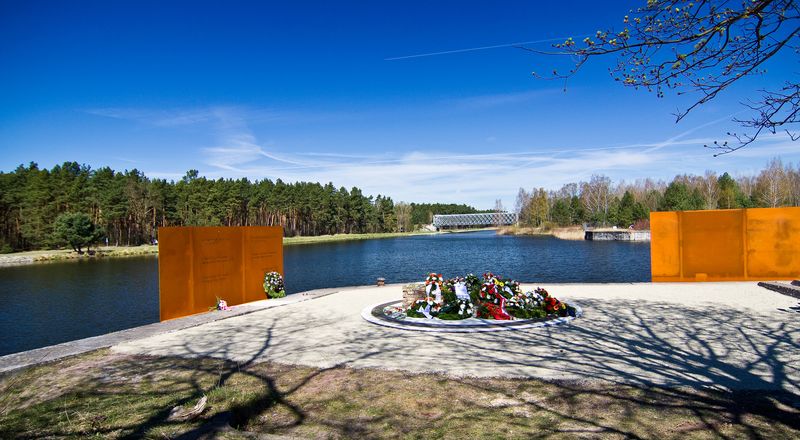 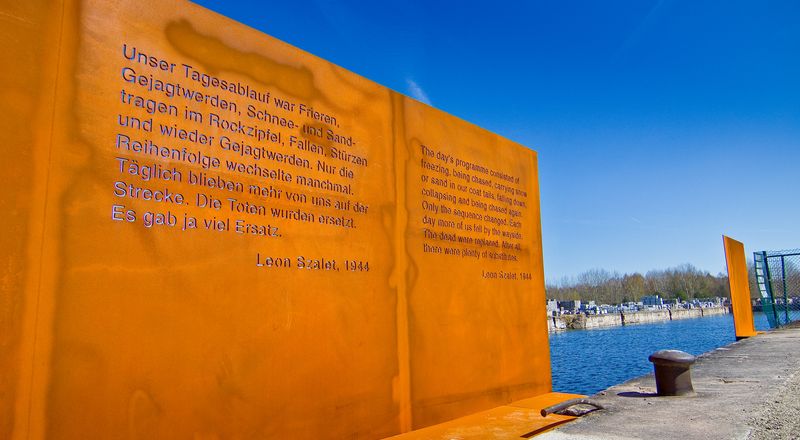 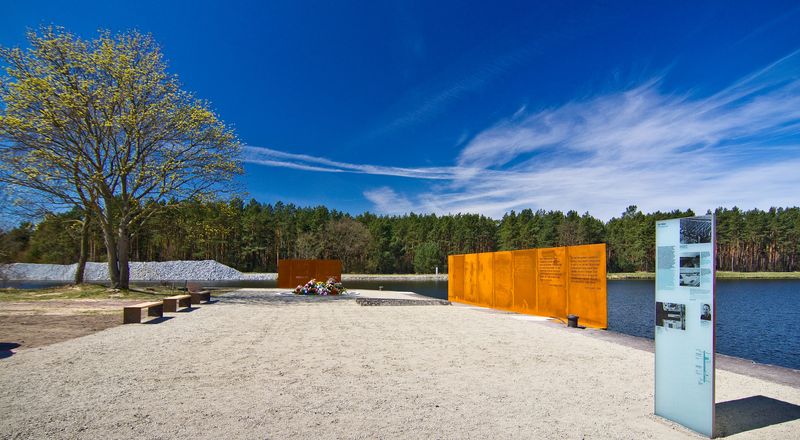 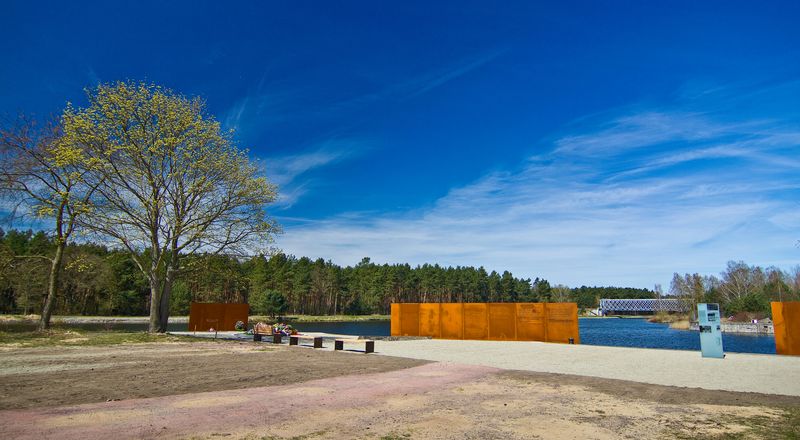 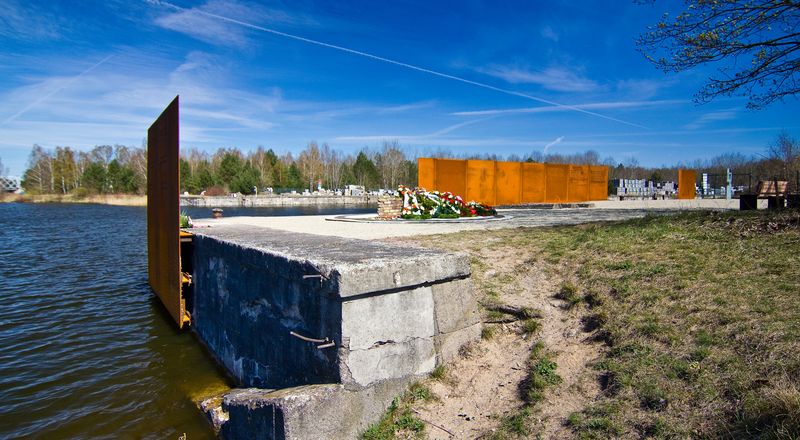 As part of the events commemorating the 70th anniversary of the liberation of the inmates of Sachsenhausen concentration camp in 2015 a new memorial to the victims of the “Klinkerwerk” satellite camp was inaugurated at the dock. Designed by Kamel Louafi and Dörte Eggert-Heerdegen, the existing memorial at the dock was partially enclosed with steel walls, of which one steel panel bears a quotation by a survivor. Openings create lines of sight to the authentic place and its surrounding area. The existing memorial, a triangle made in 1998 by young people as part of a work camp from brinks found strewn on the site, was enclosed by a round concrete pedestal which bears a dedication text.