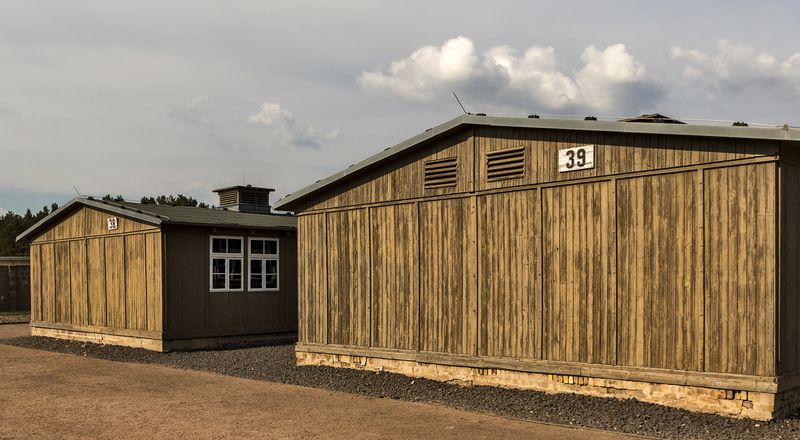 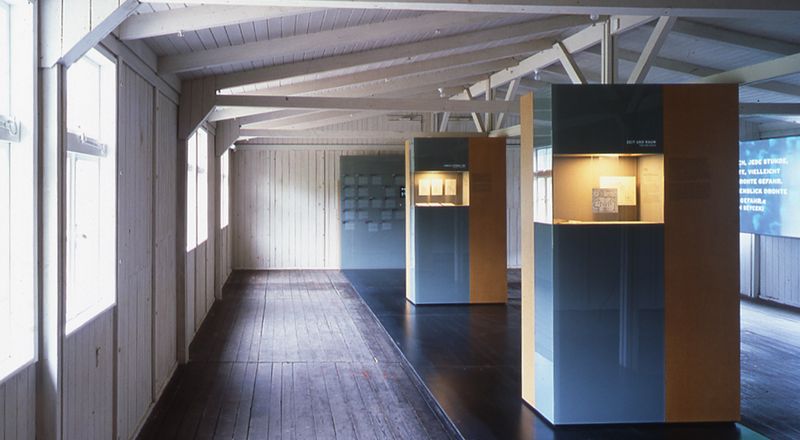 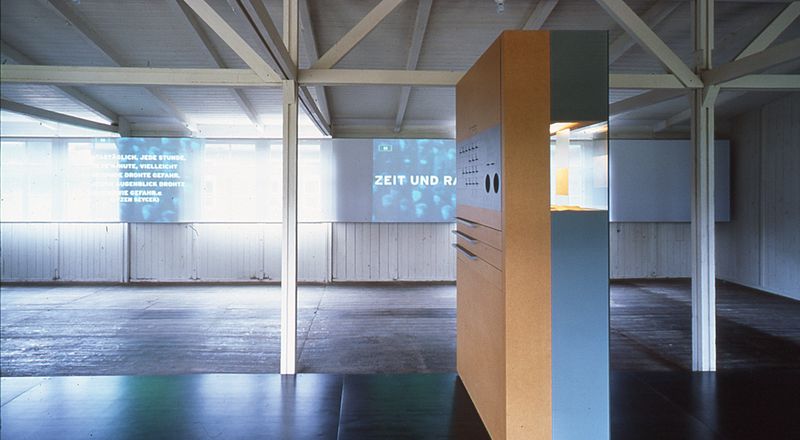 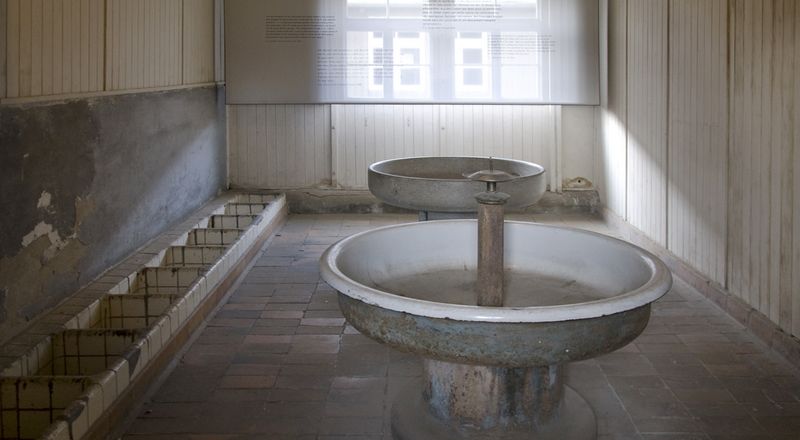 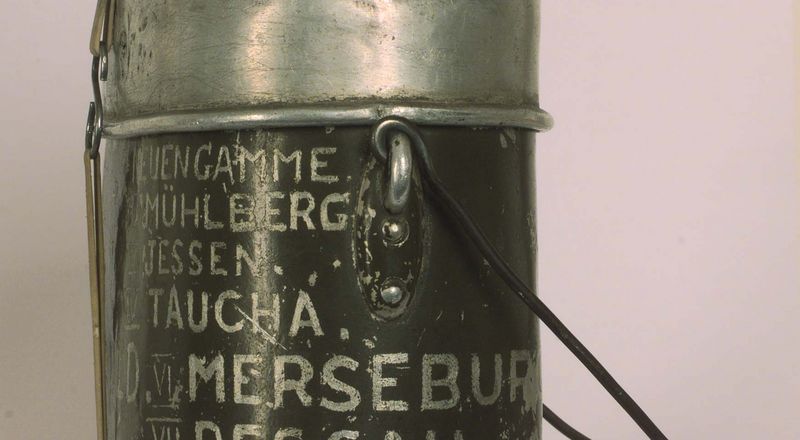 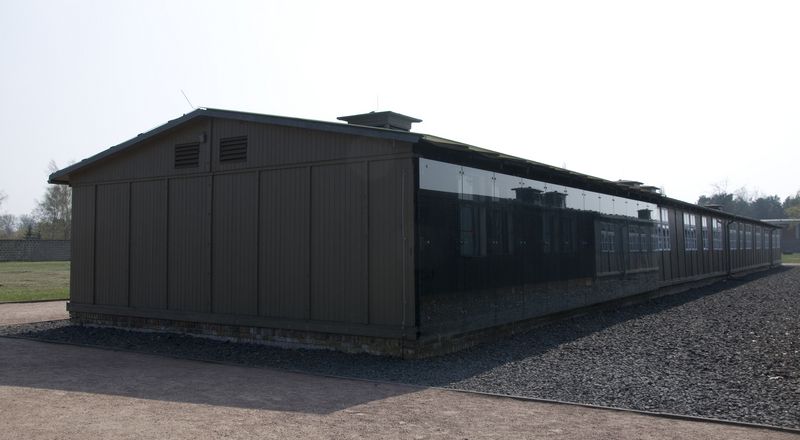 The “Everyday Life” of Prisoners in Sachsenhausen Concentration Camp 1936–1945

Barrack 39 was part of the so-called Small Camp set up in 1938. It was rebuilt from original parts in 1961 and restored by Braun & Voigt architects in 2001. From 1938 to 1942 it accommodated mainly Jewish prisoners in very crowded conditions. The barrack’s two wings and the sanitary tract between them (which is largely retained its original fittings) now house an exhibition that opened in 2001: “The ‘Everyday Life’ of Prisoners in Sachsenhausen Concentration Camp 1936–1945”.

In order to preserve the barrack’s original appearance as far as possible, the design of the exhibition is very restrained. Its main physical components are six large display cases. Along the inside of the wall and windows there is a continuous span of partially transparent gauze, on which six films are projected. Lasting about three minutes each, these outline the most important aspects of daily life for prisoners in the camp, using enlargements of drawings by prisoners themselves. Carefully selected key exhibits help to bring alive the particular subjects on which the exhibition focuses.

Everyday life, as experienced by prisoners in the concentration camp, resembled a perpetual succession of exceptional circumstances, notwithstanding the daily routine that was dictated down to the smallest detail by the SS. The only former prisoners can do justice to it in the telling, even though their descriptions are necessarily subjective. All of the accounts given from the perpetrators’ viewpoint gloss over or play down the daily reality, which was one of total control and miserable living conditions, accompanied by the arbitrary or organized terrorising of prisoners through beatings, torture and murder. For this reason, the exhibition is based exclusively on the recollections of former prisoners. Twenty of them have been selected for the exhibition to represent the entire spectrum of “prison society” in Sachsenhausen, in all of its political, social, religious, ethnic and national variety. Carefully chosen, relatively short excerpts from interviews with eyewitnesses or their relatives can be listened to with headphones or normal loudspeakers. The ex-prisoners accounts, 120 in all, also relate to specific objects on display in the exhibition. These help to bring home the physical reality of some of the stories told about day-to-day life in a concentration camp.

Designed by the architectural practice of Prof. HG Merz, the exhibition comprises six themed sections. “Roads to Sachsenhausen” covers the various reasons and pretexts for imprisonment, while in the section on “Prison Society”, the often brutal hierarchy within the “most extremely class-ridden society” (Primo Levi) is addressed. “Work” examines the different types of forced labour, which could mean the difference between life and death to a prisoner, and “Space and Time” is about the total loss of freedom of movement. The fifth section is “Violence, Dying and Death” and the last is “Living with the Memory”, which looks at how the lives of former prisoners have been affected by their experiences of concentration camp life, even after liberation.

A brief introduction to the twenty selected representative prisoners is given at the entrances to each wing of barrack 39. Their biographies are presented in greater depth in multimedia stations at each of the building’s gable ends. The use of the sanitary rooms for the maltreatment and murder of prisoners is documented with the help of excerpts from the trials of SS personnel.

The CD that accompanies the exhibition, called “The ‘Everyday Life’ of Prisoners in Sachsenhausen Concentration Camp 1936–1945” is available in German and English. It has received the “Europrix. Excellence in New Media 2002” award and the “digita 2003” award of the German Association of History Teachers. It is on sale at a special reduced price of 20 Euros in the Sachsenhausen Memorial bookshop.